On Black Friday, Access Now joined Lush Cosmetics in launching the next stage of the worldwide #KeepitOn campaign to fight internet shutdowns with a limited edition “bath bomb” called “Error 404.” And we went big — the #KeepItOn campaign is featured on Lush.com in 6 languages, 40 countries, and in hundreds of stores across the world. Below is a selection of social media highlights from the campaign, which has featured everything from creative short videos to poems and in-store actions.

Sales of the Error 404 bath bomb, an effervescent gold-coated soap that dissolves in water, close on Wednesday, November 30 in North America and continue through Wednesday, December 7 in the rest of the world.

Highlights from the campaign

Lush blacked out its websites around the world on Black Friday, confronting users with a fake shutdown and urging them to take action 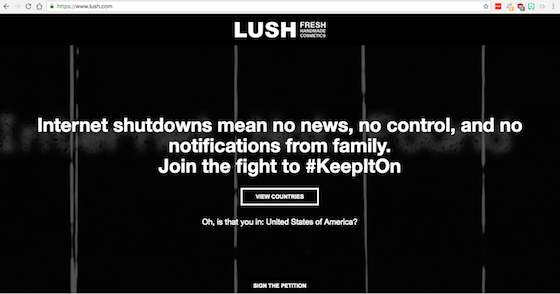 Art is about making a stand, in whatever way you can. Here is poet @JoeyBrannigan‘s interpretation on telling world leaders to #keepiton pic.twitter.com/2sjI9HheqC 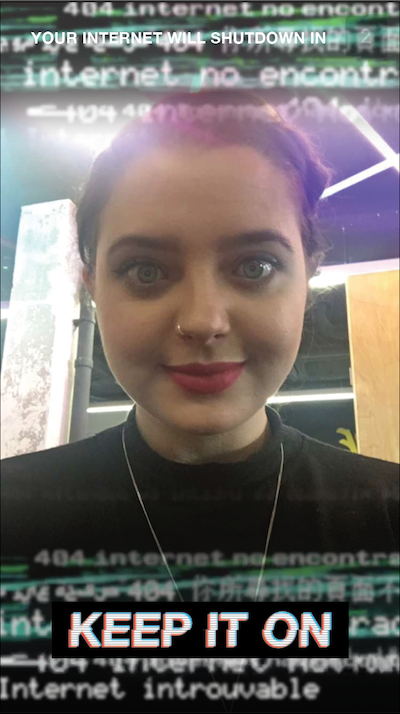 Profits from the sale of the Error 404 bath bomb, which customers can purchase at Lush.com and participating Lush stores, will go towards a Digital Fund that will be used to support the campaign and digital rights activists around the globe. Customers are also invited to take action by signing a petition at accessnow.org/keepiton asking world leaders to keep the internet on. “Error 404” refers to the common error code that internet users see when they reach a web page that doesn’t exist or is no longer available.

Access Now has documented more than 50 internet shutdowns in 2016 alone, up from under 20 in 2015. In June, the United Nations Human Rights Council passed a resolution that specifically condemns internet shutdowns. The Global Network Initiative also joined the Telecommunications Industry Dialogue — which together include Facebook, Google, Microsoft, AT&T, and Vodafone — to speak out against shutdowns. This bold statement was swiftly followed by a statement from the GSMA, one of the world’s largest technology associations, that laid out strict standards for orders issued to telcos to restrict service.

On the final day of the campaign (Wednesday, December 7, 2016), signed petitions from the online action will be delivered to government leaders at the Internet Governance Forum, where U.N. delegates will be gathering in Guadalajara, Mexico to discuss the future of the open internet. More than 3,000 participants from around the world will join the meeting, making this a critical moment to urge leaders to speak out against internet shutdowns.

About Lush – Since establishing 21 years ago, Lush has been driven by innovation and its ethics. Creators of pioneering beauty products such as the fizzing bath bomb, shower jellies, and solid shampoo bars, Lush places emphasis on fresh ingredients like organic fruits and vegetables. Lush fights tirelessly against animal testing and operates a thoroughly comprehensive Ethical Buying department, supporting Fair Trade and Community Trade initiatives. Lush leads the cosmetics industry in combating over-packaging by running public awareness campaigns and developing products that can be sold “naked” to the consumer without any packaging.

Lush Digital contributes to and is part of the global open source software community, striving to ensure they use only ethically sourced and powered hardware and take a strong ethical stance on how data should be used and control of privacy given back to the user. Lush has been awarded the RSPCA Good Business Award for 2006, 2007, and 2009, along with the 2006 PETA Trailblazer Award for Animal Welfare. Co-founders Mark and Mo Constantine were awarded OBEs for services to the beauty industry in the new year’s honours list 2010. Lush was the winner of the Best in Business Award at the 2014 Observer Ethical Awards, World’s Most Ethical Retailer at the 2016 World Retail Congress and the shops and website are regularly voted at the top of Which? magazine’s customer service surveys.

Today Lush operates in 47 countries with 932 shops, 38 websites shipping worldwide and a global network of native apps, broadcasting channels and digital communities in over 30 languages. www.lush.com

About Access Now – Access Now defends and extends the digital rights of users at risk around the world. By combining innovative policy, global advocacy, and direct technical support, we fight for open and secure communications for all. Access Now was founded in 2009 by Brett Solomon and Cameran Ashraf, after the contested Iranian presidential election of that year. During the protests that followed this election, Access Now played a role in disseminating the video footage which came out of Iran.

Access Now was a finalist for the 2010 Sakharov Prize for Freedom of Thought, was awarded a Knight Prototype Fund grant in 2013, and in 2015, we were nominated for the Human Rights Tulip Award by David Kaye, the U.N. Special Rapporteur on freedom of speech and expression.