Google released its semi-annual transparency report today, indicating an increase in government requests for content removal worldwide–although more than half came from a handful of countries. At the same time, the report also revealed that government requests for user data have plateaued, and for the first time, both the proportion and raw number of user accounts whose data was turned over in response to requests decreased, leading to the question: Is this a turning point for privacy?

Now in its third year, the report covers real-time disruptions of Google services around the world, and tallies content removal requests the company receives from corporations and governments as well as requests for user data received from governments and courts. The most recent reporting period covered the second half of 2012.

The latest report shows a rise in the number of requests by governments to take down user-generated content. According to the company’s blog, “it’s become increasingly clear that the scope of government attempts to censor content on Google services has grown.”

However, although the raw number of requests have risen, overall compliance has decreased, giving the appearance that Google is pushing back against superfluous, arbitrary, and unwarranted requests.

While the worldwide number of government requests for content removal jumped, from 1,811 in the first half of 2012 to 2,285 in the second half of the year, Google’s overall compliance rate has fallen. The company now complies with fewer than 50% of content removal requests, whether court orders or direct requests by law enforcement agencies. As Google’s content removal request system matures, the company appears to be growing more confident in its ability to demand the application of due process prior to censoring user content. 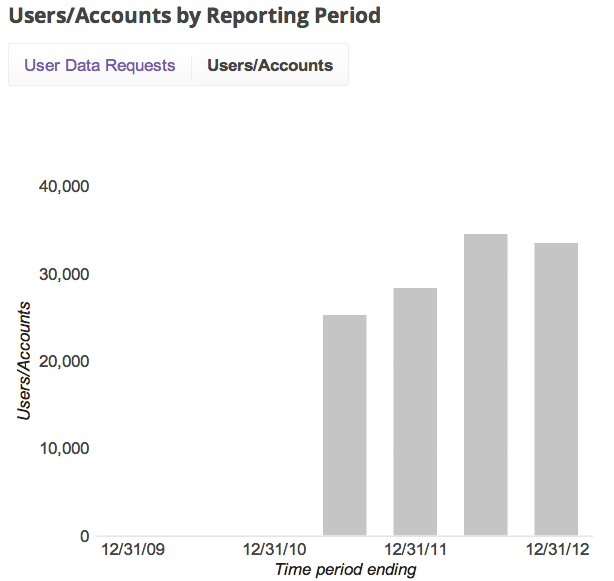 Overall, the U.S. government still leads with with the most requests for user data. This is likely because the United States hosts a vast majority of ISPs, and many requests made by U.S. investigators are actually on behalf of other governments using mutual legal assistance treaties (MLATs) and other diplomatic mechanisms that facilitate the exchange of information for investigations.

In a blog post accompanying the report, Google notes that the increase in content removal requests can be traced back the newly amended Brazilian Electoral Code, which forbids commentary offensive to candidates. Brazil’s judicially ordered requests increased more than fourfold from 143 requests to 640, as the country held widespread municipal, city, and provincial elections. Google is appealing many of these cases, and may play an important role in shaping how these newly implemented laws will be interpreted.

This is not the first time one country’s abrupt escalation in content policing has had a disproportionate impact on overall results. Google’s last report reflected a fourfold increase in content removal requests by Turkish law enforcement agencies following a sudden increase in guerrilla violence by Kurdish separatists. It’s possible that the recent decrease in requests, from 453 to 70 over a comparable period, has been related to ongoing peace discussions. (It should also be noted that in October of 2012, Google launched a Turkish version of YouTube, placing the site under Turkish jurisdiction and allowing local authorities greater oversight. Previously, the country had employed widespread filtering of a number of Google sites, a practice found by the European Court of Human Rights to be in violation of the European Convention on Human Rights).

Russia rose significantly in the rankings as a takedown offender, following the enactment of a new law expanding the country’s internal blacklist of internet sites. The numbers grew from just six requests in the first half of 2012, to 114 requests to remove content in the latest period, with 107 of the requests “citing [the] new law,” according to Google’s blog.

Unrest and censorship in parts of India, as well as inquiries over the Innocence of Muslims video on YouTube, likely led to a 90% jump in content removal requests compared to the previous reporting period from that country.

The need for transparency reports by US telcos was highlighted yet again this week by the Electronic Privacy Information Center’s recent revelation that the US Department of Justice had secretly “provided legal immunity to [ISPs] by agreeing not to prosecute for criminal violations of the Wiretap Act.” This came hot on the heels of the passage of the Cyber Intelligence Sharing and Protection Act, which allows for nearly indiscriminate sharing of user data from the private sector to government agencies, and broad immunity for participating companies.

As more information about users moves online, it is imperative that safeguards are in place to ensure the confidentiality of communications and the privacy of users. Transparency reports are a critical mechanism by which the public can track the actions of governments and corporate responses, and for possible violations of individual rights to be highlighted and addressed.

The efforts of civil society and corporate social responsibility organizations are critical to supporting and expanding this practice of disclosure. Now, large telecommunications companies are next on the horizon: after U.S. Representative Ed Markey wrote to the country’s telcos, they released ad hoc reports with the “startling” revelation that they had complied with more than 1.3 million requests for user information. Following the example set by Google, Microsoft, and others, it is time this becomes a regular practice.

(Full disclosure: Google has been a long time supporter of Access and its activities, and contributes to our overall budget).